Back to Blog
Wind ED

Yaw by Consensus: a Swarm Application

Taking cues from nature, and the intuitive decision-making of birds in flight, WindESCo Swarm is set to unlock millions of dollars for wind asset owners by enabling cooperative wind turbine control to boost production for the wind plant – not just individual assets – by 3-5% annually.  For a typical 1GW wind plant, this would translate to $20 million (€17 million) in profit over a five year period.

WindESCo Swarm offers multiple value propositions, which combined increase Annual Energy Production (AEP) site-wide. Below, you will learn about one of the applications developed by the WindESCo team to achieve Swarm at wind plants.

Wind turbines in a wind plant typically operate independently and rely on their own sensors to determine the wind direction and to make appropriate control decisions. These sensors are usually mounted on the turbine nacelle, and thus, measure the flow direction at a single point near the center of the rotor.  These single point-in-space nacelle measurements are unable to resolve how the wind field is varying throughout the wind plant. This often leads to suboptimal control decisions wherein turbines yaw unnecessarily in response to local eddies and turbulence, which induces wind plant underperformance.

However, by combining measurements from neighboring turbines, a comprehensive characterization of the wind plant complex flow field can be determined and the yaw positioning of individual turbines can be optimized, facilitating enhanced energy capture and reducing yaw control action. By sharing knowledge of the wind between wind turbines and using this information to optimize turbine yaw control, which WindESCo refers to as “yaw by consensus”, all wind turbines in the fleet can improve their performance. 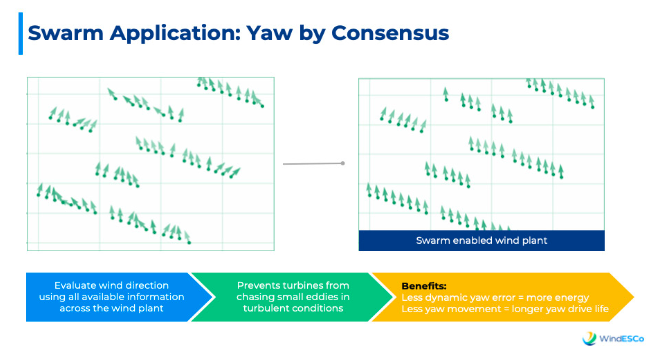 Yaw by Consensus, when paired with other Swarm Applications can result in a 3-5% improvement in plant AEP without negatively impacting the lifetime of assets.

To learn more, visit the Swarm web page or contact us.

How the Best Internal Data Teams Look at Their SCADA