Back to Blog
News

The Continued Rise of Corporate PPAs

The growing global popularity of corporate power purchase agreements (PPAs) was proved beyond doubt in the last year.

Despite the COVID-19 pandemic, a global recession and uncertainty about US energy policy ahead of the US presidential election, corporate clean energy buying increased by 18% in 2020.

What is a power purchase agreement (PPA)?

A power purchase agreement (PPA) is a contractual agreement between an energy buyer and an energy seller.

The two parties agree to buy and sell an amount of energy which is, or will be, generated by a renewable asset. Usually, PPAs are long-term deals that cover a period between 10 and 20 years.

Which country has the biggest PPA market?

The US was again the largest PPA market in 2020, though the total volume of PPAs signed decreased, largely due to the pandemic – this was the first year-on-year drop since 2016.

There was also a decline in the volume of PPAs signed in Latin America in 2020. Businesses announced a total of 1.5 GW of corporate PPAs, a 25% decrease on the 2019 total of 2 GW.

Which regions have the fastest growing PPA markets?

Despite declines in the number of corporate PPAs signed in North America and Latin America, there was a dramatic increase in PPAs in Europe, the Middle East and Africa (EMEA).

Corporations in the Asia Pacific (APAC) region also had a record-breaking year for PPAs in 2002, announcing contracts for 2.9 GW, up from 1.2 GW the previous year.

Which companies are the biggest buyers of renewable energy?

The top 10 companies by renewable energy procured in 2020, according to REBA, were: 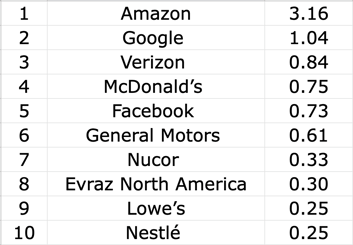 What are the different types of PPA?

What is the outlook for Corporate PPAs?

It is anticipated that between 44 GW and 72 GW of corporate PPAs will be signed in the US alone before the end of the decade.

Meanwhile, it is anticipated that the RE100 – a group of more than 300 companies “committed to 100% renewable electricity” – will sign PPAs that could lead to 93 GW of new renewables projects by 2030.

WindESCO Brings in Deloitte as Strategic Partnership Leader for Spain